It was my neice’s 11th birthday recently and as we were going away with them for half term, I took along a bunch of baking stuff so I could make her a special cake.

Naturally I turned to Pinterest for inspiration, and I kept coming across cute fox cakes that I thought she would love. I’ve also wanted to make a striped zebra cake for ages, so I thought I would combine the two.

I wanted a tall layer cake and this recipe is enough for three shallow 8 inch cake tins, which I cut in half so we had six layers. If you want to get the zebra stripes to work in the best way, it’s probably better to bake one deep cake so the stripes stay in line.

For the white stripes:

For the brown stripes:

I made them at the same time in two separate bowls.

Cream the butter and sugar then add the eggs. Fold in the sifted flour, baking powder (and cocoa for the dark stripes). Add enough milk to make a soft, loose mix. You don’t want it too stiff.

I actually mushed down 100g of raspberries and added them to the white stripe mix instead of some of the milk. Made it nice and moist.

Now for the fun bit. Grease and line the bottom of the cake tins.

Add a blob of dark mix in the centre of each tin, allow it to spread a little. Then add a blob of white directly in the centre of the dark one, allow to spread a little, then add dark. Keep on going until the mix has spread to the edge of the tin and all of the mix is used up. This is a good video here that shows how it works. Her mix is very runny, but it doesn’t have to be quite that runny. Mine was reasonably thick and I just encouraged it to go to the edges by tipping the tins.

Once cold I cut all of my cakes in half to make six tiers and sandwiched them together with raspberry jam, chocolate buttercream, and on the middle layer I put fresh raspberries too.

I then iced the outside with chocolate ganache, which was 400g of dark chocolate and 200ml of double cream. I chopped the chocolate and poured over the cream which I had warmed in the microwave. I managed to split it (eek), but discovered if you warm some milk and beat it in, then it magically goes back to the way it should be! Once the ganache was on I put it in the fridge overnight.

I used bought fondant icing (Mary Berry would be horrified). All Renshaws from Hobbycraft One small pack (250g size) of orange, 1/4 small pack of brown and half a large pack (500g size) of white kneaded together. This was the perfect amount to cover the cake, make the ears and tail. If you like your icing thick then use more as I rolled it reasonably thin.

The ears are triangles with the edges feathered (just cut out little triangles) and stacked them with a bit of black at the top and white inners. I just curled them slightly on my hand, and placed them on top of the cake. I used an egg box behind them to support them until they dried! 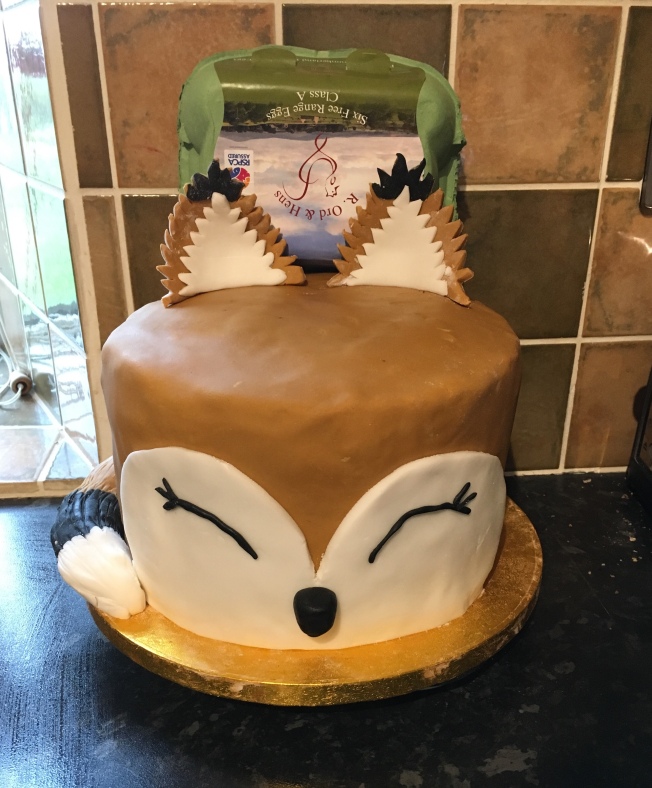 The tail is a roll of the main cake colour fondant, with black then white pushed together at the end. I make it look like fur with the back of a knife. This also helped blend the three colours together. 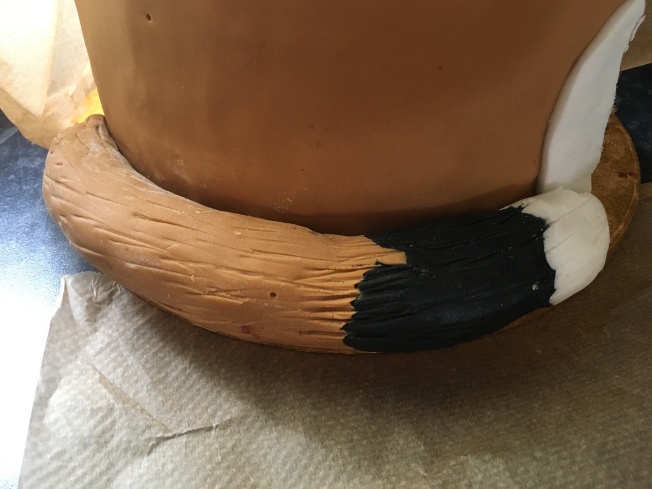 The face is white cut into a shape like the top of a heart and attached to the main cake with a little water on the back.

The nose is a blob of black, and the eyes are thin sausages of black stuck in an arch and then two tiny bits for eyelashes. 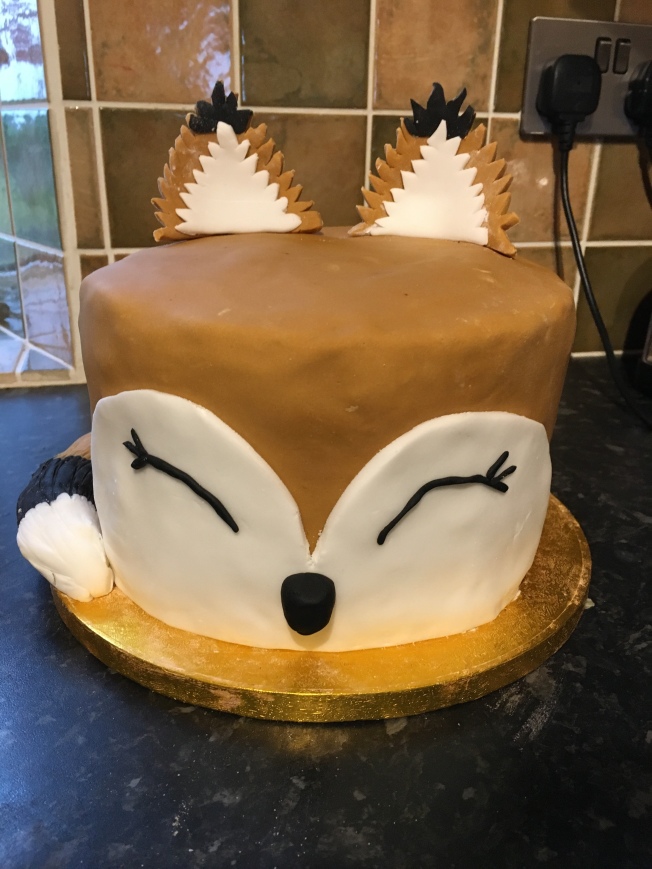 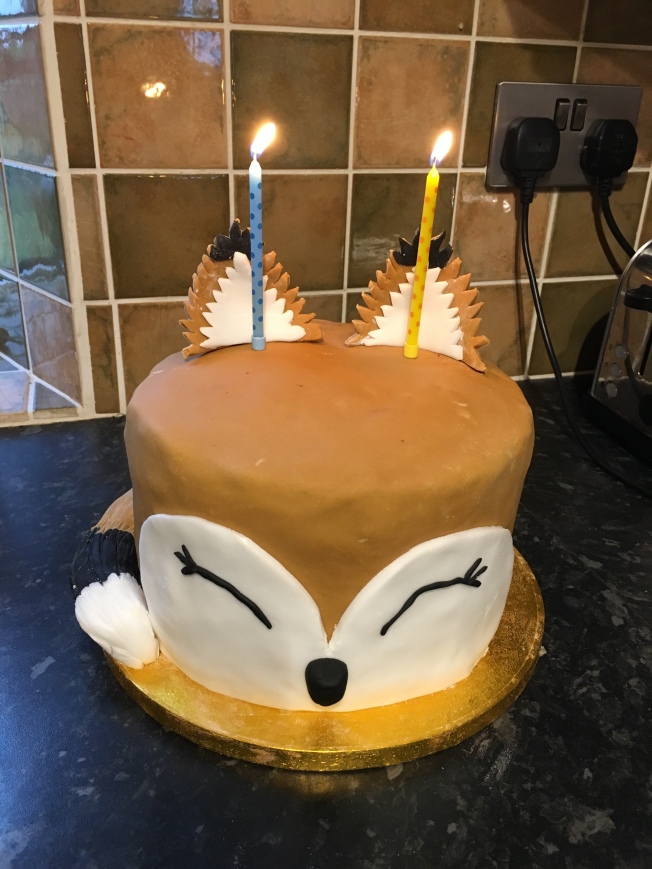 As you can see from this slice. The zebra stripes inside didn’t work so well – it looks more like a normal marble cake. It would have been much better as one or two larger cakes sliced and then put back together in the same pattern. Mine got a bit mixed up because it was so many cakes and layers. 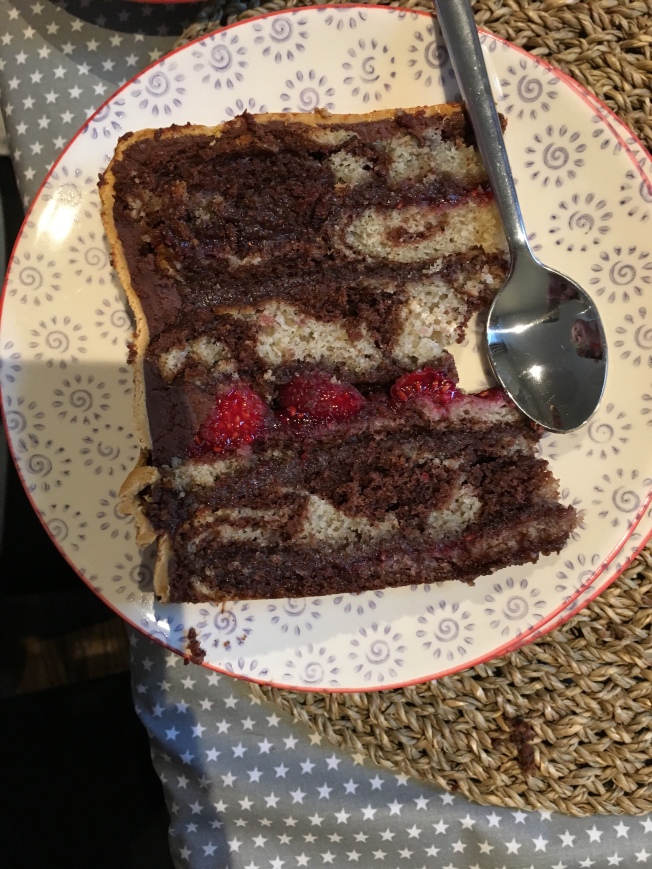 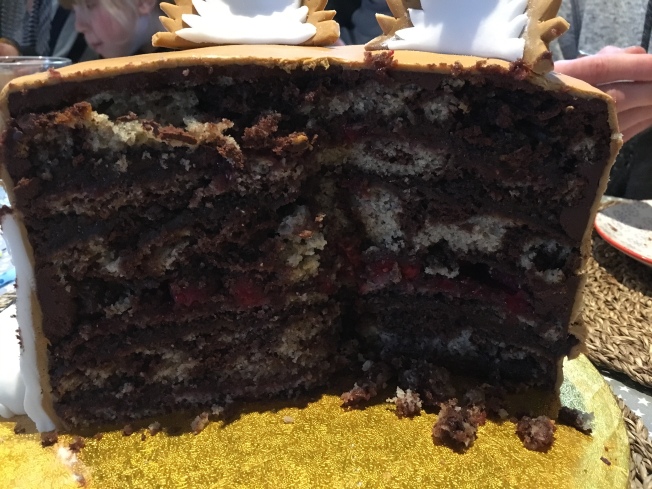 All in all though, a successful cake, which tasted yummy and looked cute!